Upon general request, CmiVFX is proud announce its two first volumes of new series of Houdini videos about VEX and VOPs. VEX is one of these things that makes Houdini really unique. Initially designed to be a powerful shading language, its paradigm has been extended to enable users to create new custom operators (like new SOPs, POPs, CHOPs). With the Houdini visual programming philosophy, VEX comes as a new dedicated context: VOPS where the data flow of your program is represented by custom nodes that wrap mathematical functions. VEX programming is so immense of a field that you could recreate almost half of the nodSOP context, maybe the easiest one to master: this means you'll learn how to create new surface operators, new modeling tools, new deformers with VEX/VOPs. It is at the same time an introduction to VEX concepts that are shared among all the various contexts, that we will reuse in our videos about rendering and shader development, or in videos about particle animation .Seashells, global deformers, water ripples... while being a language reference, these videos are intended to be a great cookbook for useful mathematical formulas. 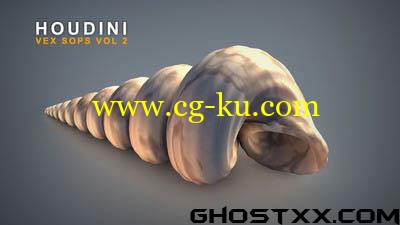